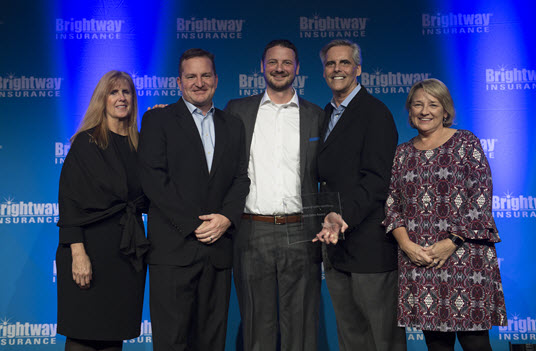 JACKSONVILLE, FLA. — Brightway Insurance, one of the largest Personal Lines independent insurance agencies in the U.S., named Billy Wagner, Owner of Brightway, Ponte Vedra Beach, as its 2019 Agency Owner of the Year (Units). This is the third consecutive year that Wagner has won Brightway’s top award.

“Billy and his team do phenomenal work, and I look forward to this time each year when we recognize our top Agency Owners and Agents,” said Brightway President and CEO, Michael Miller.

Today, there are 203 Brightway agencies across 22 states. Wagner’s agency added another 3,752 policies to its book in 2019, driving the agency’s annualized written premium to nearly $20 million by year-end 2019. Brightway’s leadership team presented the award to Wagner during the company’s annual awards celebration held Thursday, Jan. 23, at the Hilton Bonnet Creek in Orlando.

In addition to winning Brightway’s top award, Brightway recognized Wagner for leading Home and Flood policy sales last year, and as the 2019 Southeast Regional Sales Leader. Wagner frequently speaks at local events for homebuyers and professionals in the industry and is seen as a leader in the insurance industry. Just two days after winning the award, he spoke to an audience of 1,000 Insurance Agency Owners in San Diego, California, as a keynote speaker at the Independent Agency Owners Alliance’s conference.

In addition to awarding top Agency Owners and Agents, Brightway named two Employees of the Year from its Corporate Office in Jacksonville. Matthew Lossmann is an Agency Development Specialist who has been with Brightway nearly three years. Augusta Roueche-Storey is a Personal Lines Renewal Specialist I who has been with Brightway three years. Both Lossmann and Roueche-Storey exhibited Brightway’s Core Values of Smart, Accountable and Trustworthy.

“Congratulations to Billy, Jodi, Danny, Chris, Timothy, Justin, Erika, Josh, Augusta and Matthew on their achievements,” Miller added. “We’re thrilled to see our Agency Owners, Agents and employees reach their potential by leveraging the holistic platform of support that is key to the Brightway system.”

Backed by hundreds of insurance professionals who support each aspect necessary to run a high-producing independent agency and armed with partnerships with the most insurance brands, Brightway franchisees become the insurance experts in their communities who offer the most choice.

About Brightway Insurance
Brightway Insurance is a national property/casualty insurance distribution company with more than $645 million in annualized written premium, making it one of the largest Personal Lines agencies in the U.S.

Brightway got its start in 2008 and has since grown to nearly 900 people in 203 offices across 22 states serving customers in all 50 states.