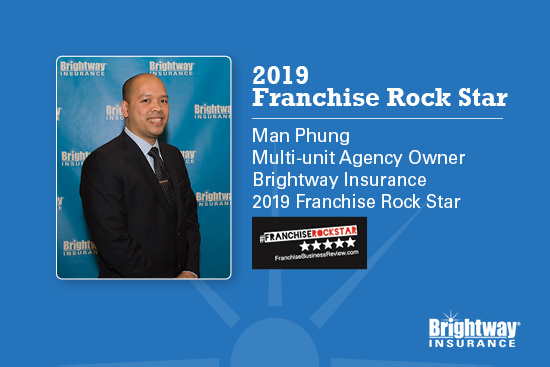 The Rock Stars recognized were nominated by their franchisor as ones who set the bar when it comes to leadership, business acumen, financial and professional success, and contributing to their community. Phung’s profile can be found on FranchiseBusinessReview.com along with the list of 2019 Rock Star Franchise Owners.

“Man Phung has been a trailblazer since becoming a Brightway Franchise Owner. He was the first to open a Brightway agency in Indiana, and in less than two years he opened a second location in another state,” said Brightway CEO and Co-Founder, Michael Miller. “Our franchise model is dedicated to the growth of our teams so that we can bolster the success of goal-minded owners like Man with comprehensive support.”

“There are so many deserving franchise owners out there who are achieving their dreams of business ownership through franchising,” said Michelle Rowan, President and Chief Operating Officer of Franchise Business Review. “It was incredibly difficult to narrow down the list, but in the end, we chose individuals who exemplify the qualities that make the franchising model work: a strong work ethic, leadership, and a real commitment to their business and community. Each one of them is truly a franchise Rock Star.”

Brightway agencies enjoy a suite of support in customer service, carrier relationships, marketing, accounting and technology. As a result, they consistently outsell other insurance agencies two-to-one.

“I’m very happy and humbled to be recognized as a Rock Star Franchise Owner two years into my career at Brightway,” said Phung. “I love being able to provide such a vital service to my community and giving them the peace of mind that comes with the service and the counsel that we provide. I’m thrilled to be a part of a system that supports its franchisees so that we can focus on providing expert counsel to our customers.”

Phung opened his first Brightway agency in 2017 and went on to open a second location in Round Rock, Texas, in 2018. In January, Brightway named him its 2018 New Agency Owner of the Year, recognizing him as the highest-producing new Agency Owner. In addition, the company presented him with the 2018 Mover and Shaker award for climbing the most spots in the new property/casualty policies written rank in the calendar year. He also received the Midwest Sales Leader regional award. Prior to joining Brightway, Phung spent more than a decade in the sales industry, acting as a General Sales Manager for a Nissan® dealership for four years.

About Brightway Insurance
Brightway Insurance is a national property/casualty insurance distribution company with more than $592 million in annualized written premium, making it one of the largest Personal Lines agencies in the U.S.

Brightway got its start in 2008 and has since grown to nearly 900 people in 186 offices across 21 states serving customers in all 50 states.

For more information about Brightway, The Phung Agency, visit BrightwayPhung.com or call 317-863-9216. Learn more about franchise opportunities with Brightway at BrightwayDifference.com.