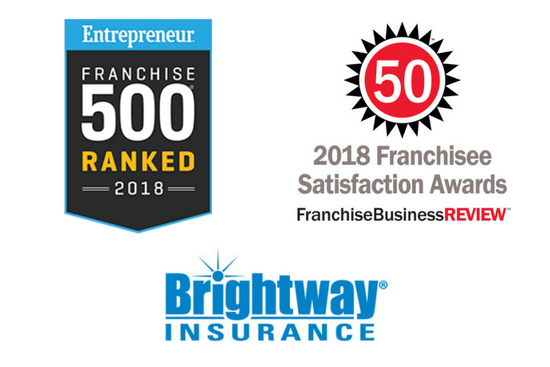 Jacksonville, Fla. — Entrepreneur magazine and Franchise Business Review have each named Brightway Insurance to their respective lists of top franchise business opportunities across the U.S. Brightway is one of the largest property and casualty agencies in the country.

“We’re thrilled to once again be named a top franchise by Entrepreneur and by Franchise Business Review. What a great way to start the new year after being recognized 11 times in 2017 as a best-in-class franchise,” said Brightway Chairman, Michael Miller, who co-founded Brightway with his brother, David, in 2008. “We measure our success by our franchisees’ success and have built a business model focused on supporting them and helping them grow their businesses as fast as possible.”

“We handle everything needed to run a business – accounting, data analytics, customer service, marketing and more – so franchisees can focus on building their sales teams,” Miller added.

Entrepreneur’s Franchise 500®
Placement in Entrepreneur’s 2018 Franchise 500® is a highly sought-after honor in the franchise industry, as evidenced by the fact that Entrepreneur received more than 1,000 applications this year, making it one of the company’s most competitive rankings ever. Recognized as an invaluable resource for potential franchisees, the Franchise 500® ranks Brightway as 199 for its outstanding performance in areas including unit growth, financial strength and stability and brand power. This is the fifth time Brightway has made the list since 2013. See Brightway’s profile on Entrepreneur.com. Results also can be seen in the January/February issue of Entrepreneur, available on newsstands Jan. 16.

“The Franchise 500 is always evolving, as we continually seek to best understand and evaluate the franchise marketplace,” says Jason Feifer, editor in chief of Entrepreneur. “We spent months gathering and analyzing data in order to produce this year’s list, and with over 1,000 franchises applying for the first time in 25 years, this may have been our most competitive ranking ever.”

“There are thousands of successful franchise companies operating in North America, but many of those companies do not offer a solid investment opportunity for the actual franchise owners,” says Eric Stites, CEO of Franchise Business Review. “As an independent research firm, we rate the franchise companies in the marketplace today and identify those that have the highest levels of satisfaction and performance among their franchisees in order to help entrepreneurs when choosing which franchise to invest in. The companies on this year’s list are the top performing brands in the areas critical to their franchisees’ success.”

Brightway provides Franchise Owners with a comprehensive system of support so they can focus on providing expert counsel and more choice in insurance brands than any other agency. Brightway’s Win3 mandate, meaning everything must be a win for Franchise Owners, a win for customers and a win for the company, has proven to be a recipe for success.

Those interested in learning more about Brightway as a business opportunity should visit BrightwayDifference.com to learn more.

About Brightway Insurance
Brightway Insurance is a national property/casualty insurance retailer selling through a network of franchised independent stores throughout the country. With more than $498 million in annualized written premium, the company is one of the largest property and casualty agencies in the United States.