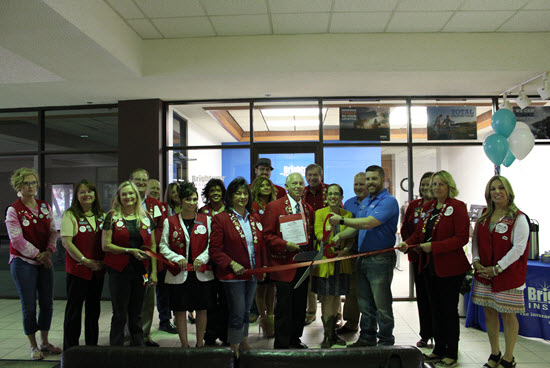 ABILENE, Texas (May 7, 2018) — Benjamin Young, Duff Young and Michelle Cleveland welcomed the community, chamber, city council, friends, family and neighbors to Brightway, The Young Agency during a ribbon-cutting event held in conjunction with the Abilene Chamber of Commerce on Friday, May 4. The agency opened for business April 24, 2017, and is located at 3444 N 1st Street, Suite 101 in Abilene (in the same building as Chase Bank). Cleveland and her brother, Benjamin Young, run the day-to-day operation of the business they own with their father, Duff Young.

Brightway Insurance is one of the largest Personal Lines insurance agencies in the U.S.

“By the end of 2017, we were the top-selling Brightway agency in Texas (in new business premium), and we earned recognition for having the second highest sales (measured by commission) in the nation of all Brightway agencies that opened across the country last year,” said Benjamin Young, a decorated combat veteran whose service in the U.S. Air Force includes tours in Iraq, Afghanistan and Korea.

“We’re really proud of the success we’ve realized in our first year of business, which is always the most difficult, and look forward to earning Abilene’s trust at the No. 1 source for more choice of insurance brands and expert counsel that you won’t find anywhere else,” Cleveland added.

About Brightway Insurance
Brightway Insurance is a national property/casualty insurance retailer selling through a network of franchised independent stores throughout the country. With more than $519 million in annualized written premium, the company is one of the largest personal lines agencies in the United States. Brightway provides its franchise owners with access to more insurance companies than any other agency, along with a comprehensive system of support that frees them up to focus on customizing policies that meet their customers’ needs.

Brightway began franchising operations in 2008 and has since grown to more than 700 people in 19 states serving customers in all 50 states. Forbes has recognized the company as America’s No. 1 Franchise to Buy. Additionally, the company was named a top franchise three years in a row by Entrepreneur magazine and one of the fastest-growing private companies in America nine consecutive years by Inc. 5000.

For more information about Brightway, The Young Agency, visit BrightwayYoung.com or call 325-899-3384. Learn more about franchise opportunities with Brightway at BrightwayDifference.com.