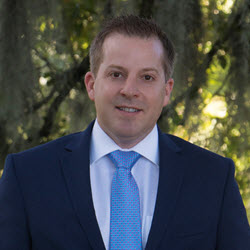 It was a personal experience in 2015 that drove Chris into insurance. He and wife, Sheree, had bought a new home that year and a new insurance policy. Shortly after their purchase, they went out of town. When they returned, they found in the stack of mail a notice from their insurance company their policy had been canceled on the day they left town on vacation. They didn’t receive any notification from their agent or from the company, aside from a piece of U.S. mail that was weeks old by the time they received it. Thankfully nothing happened in that period of time, but that didn’t stop the Schmidts from asking “what if?”

“It was that day I knew I would become involved in insurance,” Chris said. “And I vowed my customers would always know what was going on, so they would never have to endure an experience of confusion and uncertainty like we had.”

Chris and his wife are involved with various local organizations, including the Jefferson Performing Arts Society and St. Baldrick’s Foundation, a non-profit committed to conquering childhood cancers. They are members of Munholland United Methodist Church and loyal Saints and LSU fans.