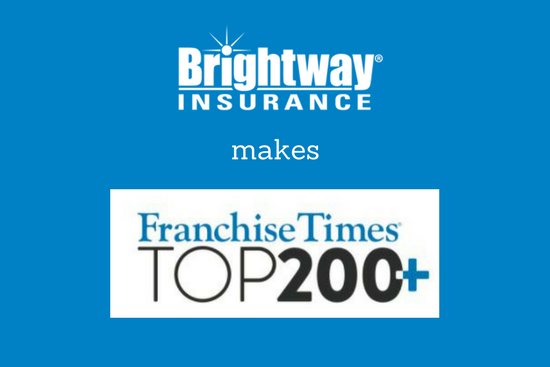 JACKSONVILLE, Fla. – For the third consecutive year, Franchise Times has named Brightway Insurance to its list of top franchises, climbing the ranking every year. On the list of 500 franchises, Brightway jumped 29 spots from last year’s ranking.

Franchise Times’ 2017 ranking looks at 2016 sales performance. Brightway finished the year with more than $436 million in annualized written premium. Brightway began franchising in 2008 and is now one of the largest property and casualty agencies in the country.

“We’re excited to be recognized once again as a top franchise,” said Brightway Co-Founder and Chairman, Michael Miller. “We’ve built a proven franchise system that provides an unparalleled, comprehensive system of support empowering franchisees to outsell the competition 3-to-1.”*

Brightway franchise owners enjoy support in customer service, carrier relationships, marketing, accounting and technology, which frees up their time to focus on leveraging the broadest possible selection of insurance companies to meet each customer’s unique needs.

Because of the suite of support the company offers, Brightway franchise owners make more than three times the income of individuals who are self-employed in other businesses. For top performers, the gap is six-fold. What’s more, having an insurance background is not a prerequisite to being a successful Agency Owner with Brightway. In fact, 40 percent of the above-average performing Brightway Agency Owners did not have prior insurance experience.

About Brightway Insurance
Brightway Insurance is a national property/casualty insurance retailer selling through a network of franchised independent stores throughout the country. With more than $482 million in annualized written premium, the company is one of the largest property and casualty agencies in the United States.