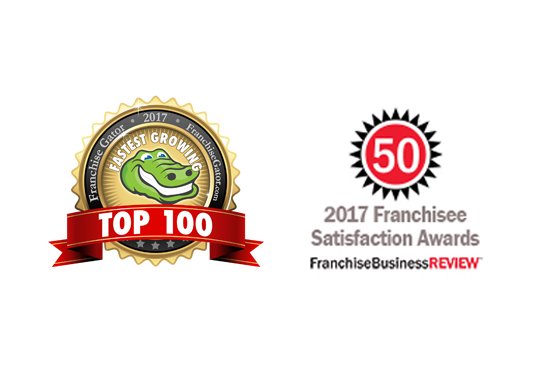 JACKSONVILLE, Fla. (Feb. 23, 2017) — Providing Agency Owners with a comprehensive system of support so they can focus on providing expert counsel and more choice in insurance companies than any other agency has proven to be a recipe for success for Brightway Insurance. Brightway’s business model is helping many Agency Owners reach their potential. As a result, two independent research companies recently identified Brightway as a top choice among franchise opportunities.

“Before we opened Brightway Insurance in 2008, we looked at how insurance was being sold and asked, ‘What should be?’ and built our business model around what customers deserve and how we can equip Agency Owners with everything they need to provide a superior customer experience. Today, we continue to ask ourselves the same question so that we never stop improving our system for our customers and Agency Owners,” said David Miller, Brightway Founder and Chairman.

“We’re thrilled to be recognized by Franchise Business Review and Franchise Gator as a top franchise company,” added Brightway President, Talman Howard. “We have a team of more than 220 insurance professionals who provide the support Agency Owners need to outsell other agents two-to-one*.”

“Franchises that survey their franchisees realize that transparency and openness contribute to a trusting relationship,” says Eric Stites, CEO of Franchise Business Review. “Franchisee satisfaction ratings show you whether or not a franchise opportunity is really as good as it appears and fits your values and vision by providing insight into a system’s culture, training, leadership, financial outlook, franchisee community and much more.”

Additionally, Franchise Gator named Brightway a Fastest Growing franchise for the second consecutive year and to its annual Top 100 for the third consecutive year. The online franchise directory developed the rankings to help prospective franchisees identify top opportunities with strong growth potential that are also affordable investments for the average franchise buyer. Franchise Gator used statistics from the Franchise Disclosure Document submitted by each franchise to rank the fastest growing franchises. See Brightway’s profile on FranchiseGator.com.

Franchise Gator’s Fastest Growing category spotlights brands experiencing rapid expansion coming into the new year. “This year we identified 100 franchise opportunities for the Fastest Growing category,” said Eric Bell, General Manager of Franchise Gator. “In addition to their track record for building a solid customer base and gaining the trust of investors, the opportunities were selected based on the number of opening and operating units the franchise has had over the past several months.”

Brightway Insurance is a national property/casualty insurance retailer selling through a network of franchised independent agencies throughout the country. With more than $442 million in annualized written premium, the company is the nation’s seventh largest privately held Personal Lines independent insurance agency.

Brightway began franchising operations in 2008 and has since grown to more than 700 people in 12 states serving customers in all 50 states. Forbes has recognized the company as America’s No. 1 Franchise to Buy. Additionally, the company was named a top franchise three years in a row by Entrepreneur magazine and one of the fastest-growing private companies in America nine consecutive years by Inc. 5000. People wishing to learn more about Agency Ownership with Brightway may visit BrightwayDifference.com and find us on LinkedIn. Consumers seeking a better insurance buying experience may visit Brightway.com, and find us on Facebook.

Franchise Gator has been around since 2002 and our only business is helping you find your business. We offer one of the largest directories of Franchise and Business Opportunities on the Internet. We work with the big guys you've heard of and the new guys that everyone will be talking about soon, making Gator your one-stop-shop for business ownership information and research. We also have hundreds of articles about franchising to help educate you on buying a business. Learn more at FranchiseGator.com.