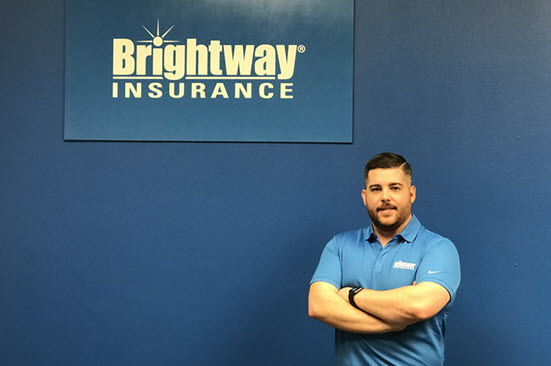 JACKSONVILLE, Fla. — Benjamin Young saw the world while serving in the U.S. Air Force and after eight years decided a career in insurance would allow him to serve his community and be home to enjoy his family. After selling as a captive agent where he was limited to selling insurance from only one brand, Young decided to become a business owner and in April 2017, he teamed up with sister, Michelle Cleveland, becoming the first people in Abilene, Texas, to open a Brightway Insurance store.

A number of veterans are enjoying business ownership and success through Brightway Insurance, landing the company on Franchise Business Review’s list of Top 100 Franchises for Veterans in 2017. In addition to looking at each brand’s overall Franchisee Satisfaction Score from its independent research, Franchise Business Review looks at satisfaction among franchisees who stated they were military veterans. Out of hundreds of brands considered, only 100 made the list.

“We’re ecstatic to be recognized by Franchise Business Review as a Top Franchise for Veterans,” said Brightway Co-Founder and Chairman, Michael Miller. “Our ‘you sell, we service’ model, along with a comprehensive system of support provides structure veterans are used to, along with the flexibility to run their own business backed by a national brand.”

Brightway Franchise Owners enjoy support in customer service, carrier relationships, marketing, accounting and technology, which frees up their time to focus on leveraging the broadest possible selection of insurance companies to meet each customer’s unique needs. As a result, Brightway agencies consistently outsell other agencies two-to-one.*

“I’m thrilled to partner with a company that focuses on helping me grow my business,” said Young. “I look forward to building a legacy for my family with Brightway.”

Another Air Force veteran trailblazing as the first Brightway Franchise Owner in Baton Rouge, La., is John Scott who said the Brightway model is a perfect fit for veterans interested in franchising.

“Brightway offers structure and training that prepares franchise owners and sets us up for success, similar to the military,” said Scott. “It’s a great business opportunity for veterans who are go-getters wanting to own their own business with the support of a national brand.”

Scott added that more veterans should know about the discount Brightway offers to franchisees who are veterans.

To show appreciation to those who served in the U.S. Armed Forces, Brightway offers a 10-percent discount off the franchise fee ($4,500 - $6,000) to veterans.

About Brightway Insurance
Brightway Insurance is a national property/casualty insurance retailer selling through a network of franchised independent stores throughout the country. With more than $488 million in annualized written premium, the company is one of the largest property and casualty agencies in the United States.

About Franchise Business Review
Franchise Business Review (FBR) is the only independent market research firm that specializes in benchmarking franchisee satisfaction based exclusively on ratings and reviews from franchise owners. FBR publishes free and unbiased franchisee satisfaction research reports throughout the year online at FranchiseBusinessReview.com.