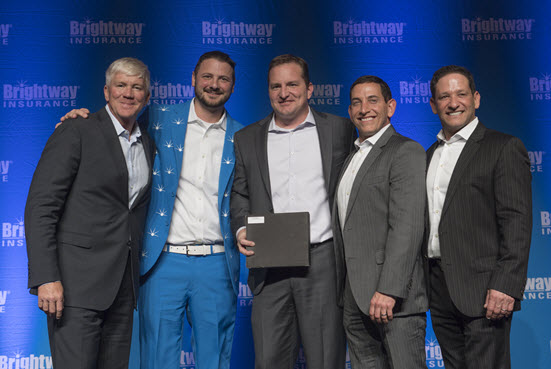 JACKSONVILLE, FLA. – Brightway Insurance, a national property/casualty insurance distribution company based in Jacksonville, Fla., named Billy Wagner, Owner of Brightway, The Ponte Vedra Beach, and Brightway, Deland, as its 2018 Agency Owner of the Year (Units). This is the second consecutive year that Wagner has won the award for selling the most policies in the Brightway system.

Today, there are 178 Brightway agencies across 21 states. Wagner’s two agencies added another 3,632 policies to its book in 2018, driving the agency’s annualized written premium to nearly $20 million by year-end 2018. Brightway’s leadership team presented the award to Wagner during the company’s annual awards celebration held Thursday, Jan. 10, at the Hilton Bonnet Creek in Orlando, Fla.

“We’re exceptionally proud of Billy Wagner and his team and look forward to this time each year when we recognize our top Agents,” said Brightway Co-Founder and CEO, Michael Miller. “Brightway is a top franchise that provides the best, most comprehensive systems of support that empowers Agency Owners, like Billy Wagner, to outsell the competition three-to-one, grow their business and build an asset for their family.”

In addition to winning Brightway’s award, Brightway recognized Wagner for leading Auto and Flood sales last year, and as the 2018 Southeast Regional Sales Leader. Wagner was one of the first people to open a Brightway agency when he opened his agency in Ponte Vedra Beach, Fla., in 2008. In 2015, he opened his second location in Deland, Fla.

Chris Huebener, who has been with Wagner's agency since the store opened, earned the top award an Agent can achieve, the 2018 $2 Million Producer Award, for selling nearly $2.9 million in written premium last year. This is the third year in a row he has earned the award.

Other big winners of the night were:

About Brightway Insurance
Brightway Insurance is a national property/casualty insurance distribution company with more than $562 million in annualized written premium, making it one of the largest Personal Lines agencies in the U.S.

Brightway’s focus is on producing win-win-win outcomes for consumers by offering customized insurance solutions and for people wishing to sell insurance by providing business opportunities that span from single Agent to multi-unit enterprises. Regardless of the path taken, Brightway provides the support necessary to consistently outsell other insurance agents.

Brightway got its start in 2008 and has since grown to more than 800 people in 178 offices across 21 states serving customers in all 50 states.