Excess Flood insurance helps you protect your assets beyond NFIP

A Homeowners policy doesn’t cover damage caused by Flooding, and last year’s active hurricane season made Flood insurance top-of-mind for many consumers, particularly in the South. That said, a Flood policy may not provide enough coverage for all homeowners.

Flood policies backed by the National Flood Insurance Program (NFIP) have a Coverage A (Dwelling) limit of $250,000. This means that if your Homeowners policy Dwelling Coverage A is greater than $250,000 you should consider an “Excess Flood” policy.

In 2021, the National Oceanic and Atmospheric Administration updated averages for the Atlantic hurricane season, using 1991-2020 as the new 30-year period on which to base storm averages. While the average number of major hurricanes remained at three, averages for named storms and hurricanes went up. 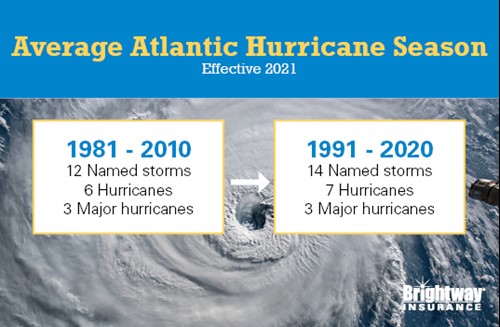 Some good news for residents in hurricane-prone areas is that the National Weather Service upgraded its model this year to better forecast extreme weather, so we can expect better forecasts. However, the time to think about insurance coverage is long before a storm is heading your way.

Hurricane Harvey in 2017, the second most significant U.S. flood event, caused $125 billion in damages. However, fewer than two out of 10 homeowners with flood damage from Harvey had insurance protection, and only $8.9 billion was paid to more than 76,000 NFIP policyholders according to the Insurance Information Institute.

Excess Flood can be relatively inexpensive and can provide higher levels of Personal Property coverages, too. Some also feature Temporary Living Expense and Other Structure coverage.